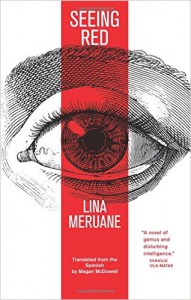 This book is described as a new-to-me genre – autobiographical novel. Apparently the author, Lina Meruane, had a stroke and suffered temporary blindness, necessitating surgery.  Her novel’s main character, also named Lina Meruane, is based on the author, also being an author having serious problems with her vision.  The literary character literally sees red from the burst blood vessels behind her eye.

The book is written in short chapters with a stream of consciousness aspect to them. Having been through a period of blindness herself, the author writes a very realistic portrayal of a woman’s deterioration of vision and the effects of her impending blindness on not only herself but her loved ones.  While Ms. Meruane did a wonderful job describing all of the terrors of blindness and its devastating consequences, there was an element of black humor that I wasn’t able to appreciate.  It’s an intelligent read and one I feel I should have been able to immerse myself into more than I was able to.

This book was given to me by the publisher through Edelweiss in return for an honest review.